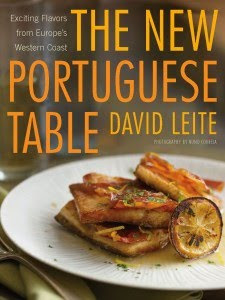 Anyone who has ever read any of David Leite’s food writings must have hoped he had a cookbook of his own doing a slow simmer on his foodie horizon.  This man has a way with words, as evidenced at his award winning web site, http://www.leitesculanaria.com and now he has revealed he also has a way with “slivers of whisker-thin kale” and “slices of sausage” as well.  It was just a matter of time before he served up  “The New Portuguese Table”, and that he has now done!

Born of Portuguese immigrants and raised in the US, it wasn’t until he lost his Grandmother that he begun to pay attention to the food being cooked in his Mother’s home.  He was concerned that when she passed on as well, so would all the Portuguese recipes he grew up enjoying.  He knew he did not want that to happen so went on a quest to watch her cook and documented her recipes.

To get in touch with his ancestral culinary heritage, he visited Portugal on vacation several times through the years before deciding to live there for a year to experience the food and the country.  While becoming friends with local chefs and learning their secrets of improving old, traditional flavors with exciting new ones, he translated these techniques into how he could take his own recipes to culinary heights achievable by all cooks.

It was during that year in Portugal that his cookbook began to come together and he found that even though his mother’s recipes had the same names as those he experienced in Portugal, they didn’t taste quite the same.  There was a food revolution going on and he was in the middle of it -- in the right place, at the right time and Leite had the finesse to convey it to all of us in The New Portuguese Table.

The recipes he captured and preserved are excellent!  We’ve tried several of them and I know they will become family favorites that we will make over and over again.   Dishes such as his Lemon-Mint Chicken Soup, the Pumpkin Soup with Spicy Seeds, Smoked Paprika Oil, and my favorite - - Eggs Simmered in Tomato Sauce.  It is a simple dish, but so full of flavor that there is a risk of it replacing some old Southern favorites as my new comfort food.  The Azorean Kale, Sausage, and Bean Soup (sopa de couve) he included in the cookbook was his Mother’s recipe and that alone made me want to try it.  Like his Dad, we also tried it for breakfast one morning and found it to be just as flavorful, comforting and sustaining as it was at dinner the evening before.

The “to try” recipes waiting for me are Sweet Lemon and Black Olive Wafers and the Green Olive Dip.  The combination of those flavors in the wafers has to be as delicious as they sound and the photo alone is enough to whet the appetite.  The dip is made with milk and that intrigues me enough to try it with green olives.

Regarding the photos, The New Portuguese Table is full of engaging photos, a feature that is sure to appeal to those who like to see how the food looks when prepared.  The plus here is that there are many photos of the Portuguese countryside also – an open invitation to experience the Portuguese food heritage.

Beautiful food, charming countryside, delectable recipes, great cookbook!  What could be better?  Volume 2?  The New Portuguese Table will be as important to your cookbook collection as it is to mine!

Reviewed by Monita Olive for CookbooksEtCetera on September 3, 2009

Posted by MoCookbooksEtc at 12:01 AM

MoCookbooksEtc
I have been collecting cookbooks for about 48 years and have amassed thousands of them. The collecting is on-going and I cannot resist something that looks good or is unusual. My newest cookbook is Mary Foreman's "Deep South Dish".